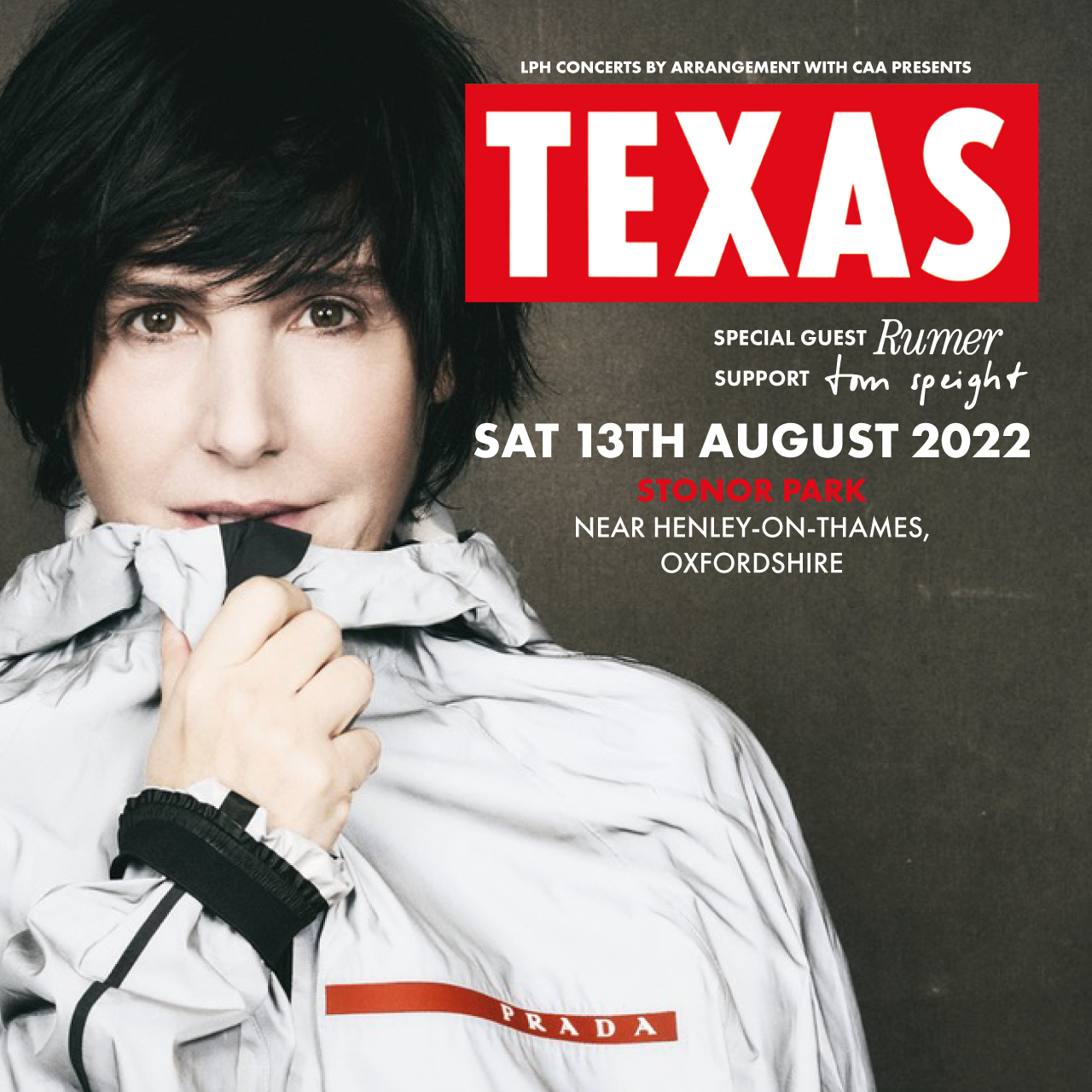 Please note this is not a picnic concert

Food and Drinks can be purchased at the venue

For over 30 years, the band have proved themselves to be one of Scotland’s best ever bands, with hits such as ‘Inner Smile’, ‘Say What You Want’, ‘I Don’t Want A Lover’ and ‘Summer Son’.

Formed in 1986 by the undeniably brilliant Sharleen Spiteri and her partner in crime, Johnny McElhone, they have made consistently great music throughout their stellar career having sold over 40 million records, had 13 top ten UK singles, 3 #1 UK albums and 8 top ten UK albums including ‘The Hush’, ‘Careful What You Wish For’ & ‘Jump On Board’, and their tenth studio album ‘Hi’ released in May 2021.  ‘Hi” became their highest-charting album in the UK since 1999’s ‘The Hush’, debuting at number 3 on the official UK album chart.

Rumer first broke through in 2010 with her debut album ‘Seasons Of My Soul’, a top 3 UK hit, achieved platinum sales status, earning her 2 BRIT Award nominations and a MOJO Award for Best Breakthrough Act. Tracks like ‘Slow’ and ‘Aretha’ became global hits as music fans were drawn to her classic voice which draws comparisons to the likes of Carole King and the late Karen Carpenter.

Since then, Rumer has released a further 4 UK top 30 albums, performed live around the world, reinterpreted much-loved songs from the Burt Bacharach and Hal David canon, and most recently enjoyed critical acclaim for her album ‘Nashville Tears’, covering the songs of American Hall Of Fame country legend Hugh Prestwood. Rumer is an undeniable talent and a mesmerising performer.

Londoner, Tom Speight is a BBC Radio 2 favourite with over 200 million streams to his name and a string of high profile tours in support of Ed Sheeran, Snow Patrol, Stereophonics, Travis and more. His 2019 album ‘Collide’ saw all six of its singles playlisted on BBC Radio 2 and topped charts as far afield as Brazil. His latest album ‘Everything’s Waiting For You’ was written in lockdown and sees him collaborate once again with Turin Brakes, Lydia Clowes and Olly Knights. With a pedigree in live performance learned while touring the world, Tom Speight has surely earned his fast-growing fanbase.

I am having trouble downloading my ticket from the confirmation email. What should I do?

This could be because the link in your email was broken or your mail client (outlook, google, etc) is having trouble viewing the attachment. To fix this problem, follow the below steps:

If you continue to have problems, this support link should answer most questions: https://support.seetickets.com

HOW DO I GET TO STONOR PARK?

Stonor is located between the M4 (J8/9) and the M40 (J6) on the B480 Henley-on-Thames – Watlington Road. Stonor is a 10 minute drive north from Henley, only an hour from London, 40 minutes from Oxford and Heathrow and half an hour from Reading.

If you are approaching Stonor on the M40 motorway from the East and are using a Satellite Navigation system please ignore any instructions to exit the motorway on either Junctions 4 or 5 as this will add up to an hour to your journey. Please only exit at Junction 6.

The nearest railway station is Henley-on-Thames and taxis are available from the station.

We do not have child tickets available for this event, but children under the age of five can attend for free.

Children aged five and over, should purchase a General Admission ticket.

All children under the age of 16 must be accompanied by an adult. No more than four under 16s per adult.

Please note: While we are a family friendly business, please remember that this is an outdoor event with loud music and lots of people and so may not be suitable for very young children

Will tickets be available on the day?

Tickets are strictly subject to availability, so it is always best to purchase your tickets in advance to avoid disappointment. It will also save you money as ticket prices may also increase on the day.

Should tickets be available to purchase on the day of the concert, we will make an announcement about prices and availability closer to the event.

Where can I park?

Parking will be available on site, free of charge. Please head towards postcode RG9 6HF and then follow our friendly traffic stewards and signage once nearby.

Disabled parking is available, and there is no need to prebook.

There is no overnight parking available for this event, any vehicles left unattended overnight will be removed.

Is there a pickup/drop off point or a taxi rank?

Yes there is. Please give postcode RG9 6HF to your driver and then follow our friendly traffic stewards and signage nearby. This is for all pick up/drop offs, including taxis etc.

Can I leave the venue and come back once I’ve entered the concert?

Unfortunately, as the concert arena is within a confined fenced area, pass outs and re-entry will not be possible.

Can I bring my own food and drinks to the event?

Can I buy food and drink at the concert?

Can I apply to be a vendor at the events?

We are always looking for interesting vendors selling unique products and would love to hear from you. Please email info@lphconcertsandevents.co.uk to tell us about all about your offering.

Please note: you must be self-contained in terms of equipment and have current Public Liability Insurance in place.

Seating is not provided but you are welcome to bring one folding chair per person in the concert arena for use in the marked-out area away from the stage. This is to maintain a safe area for those customers who wish t0 sit and those who wish to stand at the front of the stage area.

Private marquees and gazebos are not permitted.

What other items should I bring?

We ask that you keep personal belongings to a minimum and only bring your essentials.

This is a standing outdoor evening concert so please keep the British weather in mind. We recommend all concert goers should dress appropriately and be prepared if the ground is wet from rain in the days before the event.

Small personal umbrellas are allowed, however large parasols and golf sized umbrellas will not be permitted on site.

Please do not bring backpacks of any size or large bags, as these will not be allowed into the arena. There will be no temporary storage facilities for such items within the venue and it will be your responsibility to find a safe temporary facility to hold the item.

Bags left in unauthorised surrounding areas will be disposed of immediately.

LPH Concerts and Stonor Park will not be responsible for late admission or non-admission as a result of this policy. Please refer to the full Terms and Conditions on your ticket.

Is there an ATM / cash machine at the event?

Cash machines will not be available, but all bars take both cash and card payments. Please be aware that some of the independent food outlets in the arena may only take cash.

Can I take photographs?

While professional photography equipment is not permitted, you’re very welcome to capture the atmosphere and fun you and your friends and family are enjoying on a small camera or your phone. If you do take photos, please tag us in on Instagram (@lphconcerts) we’d love to see them.

LPH Concerts & Events aims to cater for all access needs to ensure everyone will have an enjoyable time at our concerts.

The concert is held on a grassed site, with paved pathways or tracking around the site and grass cut short. Once inside the concert arena there will be the following facilities available:

I'M DISABLED - CAN I BRING A CARER?

Accepted forms of documentation to request a carer or companion ticket are:

Please book both your general admission ticket and Carer tickets by clicking on Buy Tickets on this page above, as we may not be able to accommodate your request at other ticket sites.

Can I bring my dog?

Dogs are not allowed at this event, but as always, guide dogs are allowed.

IS THERE A PICKUP/DROPOFF POINT OR TAXI RANK?

Yes, please follow directional signage as you get closer to the venue on the concert day.

Please give the postcode RG9 6HF to your driver and then follow our friendly stewards and signage once nearby.

We ask that you keep personal belongings to a minimum and only bring your essentials. Please do not bring backpacks of any size or large bags, as these will not be allowed into the arena. Please refer to full Terms and Conditions.

There will be no temporary storage facilities for such items within the venue and it will be left to the patron to find a safe temporary facility to hold the item. Bags left in unauthorised surrounding areas will be disposed of immediately. LPH Concerts and Stonor Park will not be responsible for late admission or non-admission as a result of this policy.

LPH Concert and Events Terms and Conditions can be found here

LPH Concerts and Events FAQs can be found here